This pt admitted had a hx of COPD and pulmonary fibrosis c/o of dyspnea.

What is the rhythm

This is an irregular rhythm with SEVERAL P wave morphologies. All identifiable P waves are numbered in red in V1. The R to R intervals ranges from a rate of 46 bpm to about 150 bpm. You might be tempted to call this sinus rhythm with premature atrial beats but the inverted P wave (P6) before R4 is not premature. So, this is not a PAC.

The different P wave morphologies mean that they are coming from multiple ectopic atrial foci. You might also be tempted to call this wandering atrial pacemaker (WAP).

The Definition WAP from Different Books

According to ECG's Made Easy (2nd ed):

"Mulfocal atrial rhythm (MAR) is an updated term for the rhythm wandering atrial pacemaker (WAP). With this rhythm,, the size, shape, and direction of the P waves vary, from beat to beat to beat. The difference in P wave configuration reflects GRADUAL SHIFTING of the dominant pacemaker between the SA node, the atria, and/or the AV node. At least 3 different P wave configuration, seen in the same lead, are required for the diagnosis. "

Comment: If you only read one book or some basic introductory books in ECG interpretation, you will be convinced that MAT and and WAP are the same. However, they are not. The author even mentioned that "WAP may occur in some organic disease and with digitalis toxicity." However, as will be mentioned here, WAP is a NORMAL phenomenon. The lesson here is do not (just) trust one book or reference but read more books/journals.

WAP according to Braunwald's Heart Disease A Textbook of Cardiovascular Medicine (10thed) :

"This VARIANT OF SINUS ARRHYTHMIA involves passive transfer of the dominant pacemaker focus from the sinus node to latent pacemakers that have the next highest degree of automaticity located in other atrial sites (usually lower in the crista terminalis) or in AV junctional tissue. The change occurs in a GRADUAL fashion over the duration of several beats; thus, only one pacemaker at a time controls the rhythm, in sharp contrast to AV dissociation. The ECG (Figure 3) displays a cyclical increase in the R-R interval—a PR interval that gradually shortens and can become less than 120 milliseconds and a change in the P wave contour that becomes negative in lead I or II (depending on the site of discharge) or is lost within the QRS complex. In general, these changes occur in reverse as the pacemaker shifts back to the sinus node. Wandering pacemaker is a normal phenomenon that often occurs in the very young and particularly in athletes, presumably because of augmented vagal tone. Persistence of an AV junctional rhythm for long periods, however, may indicate underlying heart disease. Treatment is not usually indicated but, if necessary, is the same as that for sinus bradycardia."


Comment: WAP is a variant of sinus arrhythmia (SA). Let us touch a little of SA.

In sinus arrhythmia, the rhythm is irregular. The P wave and PR interval are normal. The P to P interval varies by 0.16 sec There are 3 types: phasic or respiratory, nonphasic or nonrespiratory and ventriculophasic.

With phasic SA (Figure 4), the rate is dependent on the respiratory cycle, increasing with respiration and decreasing with expiration. The pacemaker site in the sinoatrial node (SAN) shifts with respiration. The pacemaker site shifts higher the SAN, the heart rate and P wave amplitude in II, III and aVF increase. As the pacemaker shifts lower the SAN, the P wave amplitude and heart rate decrease. The heart rate changes gradually and rhythmically, thus differentiating it from non-phasic sinus arrhythmia.

For non-phasic (Non-respiratory) Sinus Arrhythmia (Figure 5), the P wave and PR interval are normal but the PP intervals vary at random and independent of any physiological function.

Important difference between WAP and MAR/MAT

The basic ECG criteria for WAP is the GRADUAL change of P wave morphology which is a manifestation of passive GRADUAL transfer of dominant pacemaker. If it is NOT GRADUAL then the term is MULTIFOCAL ATRIAL RHTYHM (MAR).

Mutifocal atrial rhytm/ Multifocal atrial tachycardia belong to a group called Multifocal Atrial Arrhythmia (MAA). The electrocardiographic criteria for the diagnosis of MAA that includes both MAT (atrial rate  ≥ 100 beat/min) and MAR (atrial rate < 100 beats/min) consisted of a variable P-wave morphology of at least 3 different configurations and an irregular PP and PR interval. MAR and MAT are often misinterpreted as atrial fibrillation.

Multifocal atrial rhythm is seen as an irregular rhythm with different P wave morphologies at a rate that is less than 100 bpm. The change in P wave morphology is RANDOM and NOT GRADUAL.

Multifocal atrial tachycardia is the faster version of MAR (>100 bpm to about 150 bpm). MAT is also called CHAOTIC ATRIAL TACHYCARDIA. In general, at least 3 wave contours are noted, most of the P waves are conducted to the ventricles and often with variable PR intervals. This tachycardia often occurs commonly in older patients with chronic obstructive pulmonary disease (COPD) and congestive heart failure (CHF) and often develops into ATRIAL FIBRILLATION.  The management is directed primarily toward the underlying disease. Antiarrhythmic agents are frequently ineffective in slowing either the atrial tachycardia or the ventricular response. Beta adrenorenoreceptor blockers should be avoided but can be effective if tolerated. Some of you might have seen increase in heart rates after this patients are given beta agonist (as breathing treatment).

Back to the case

This is multifocal atrial rhythm/tachycardia. The wide QRS beats were interpreted as premature ventricular beats (PVB/PVC's) but actually those beats are aberrant beats with a right bundle branch block (RBBB)  morphology (R1,R3 and R6). The P wave before those wide beats are marked with red arrows. P11, P16 and P18 are ectopic atrial beats that are not conducted. During the course of events, this case had paroxysmal atrial fibrillation but stayed most of the time in MAR/MAT.

When you look at these strips, because of the irregularity, individual RR intervals will be less than 100 bpm or greater than 100 bpm. So, this rhythm spans both MAR/MAT depending on how the strip captured the rate. Most, often this rhythm will convert to atrial fibrillation.


Compare 3 cases of Wandering atrial pacemaker vs. Multifocal atrial rhythm/Multifocal rhythm. Notice the GRADUAL transfer of the dominant pacemaker in WAP vs. the RANDOM atrial events in MAR/MAT. 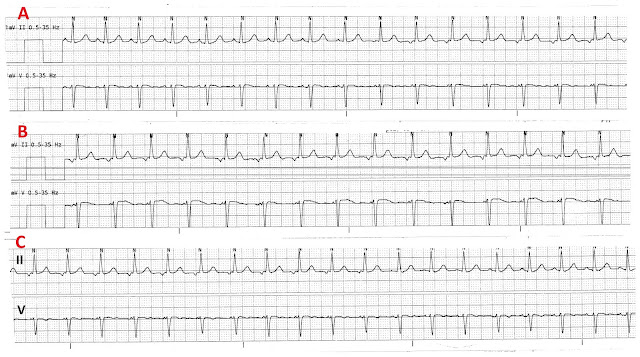 Figure 10 - Wandering atrial pacemaker - Notice the the gradual transition of the shape of the P wave. If you just see the mid-portion, it will look like ectopic atrial rhythm or even junctional rhythm. However, a long strip will reveal the gradual change in P.

Here is an interesting ECG phenomenon that is being recognized as a unique entity - interatrial block. Here is the link - https://www.sciencedirect.com/science/article/pii/S0022073612002270?via%3Dihub

In this article, try to focus on second degree interatrial block. According to the article:

Is this the same entity as MAR or is this a separate entity? This is an exciting phenomenon to watch as more data are known. We have to wait from the group of Drs Antonio Bayes de Luna and Adrian Baranchuk. What typically seen in the 2 phenomenon is the association of atrial arrhythmia/atrial fibrillation. 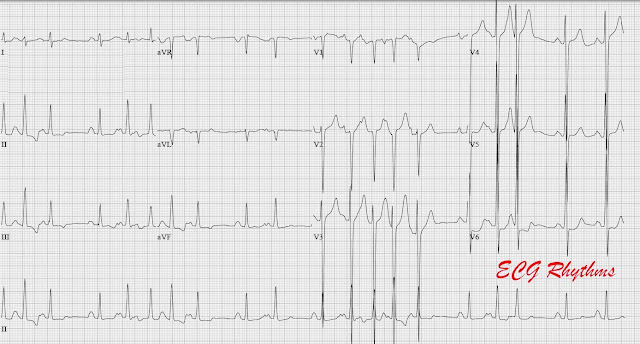